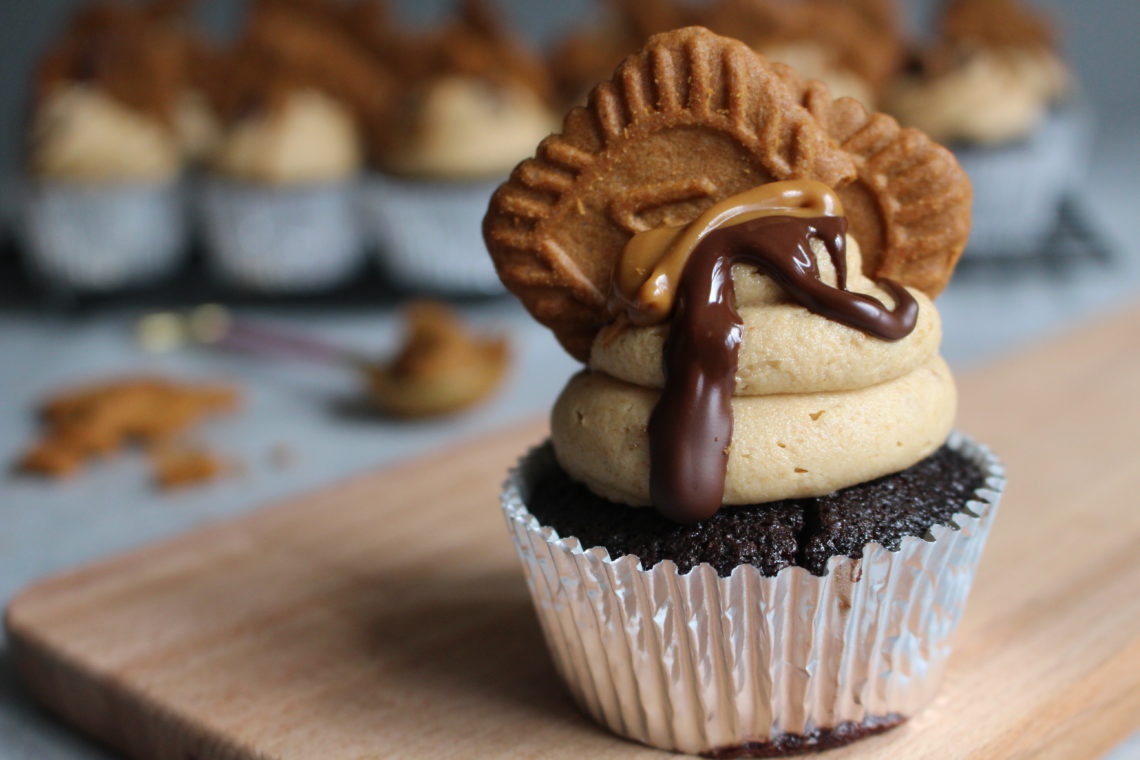 So it seems everyone is obsessed with biscoff! That sweet, caramelised, cinnamon yummy goodness seems to be flavouring all sorts of foods these days from cakes to milkshakes and i am not upset about it! Gone are the days of only having one with your fancy coffee as you can get your hands on the biscuits in most supermarkets these days, and if you keep your beady eye out you might even get hold of the spread too. I love the strong punchy flavour the spread packs as it makes it really easy to flavour things such as buttercream and cheesecakes.

That being said, if I was going to push the boat out and make cupcakes then obviously they had to be biscoff, right?

The most cost effective place I have found to buy Lotus Biscuits is B&M as it’s less than half the price of supermarkets. However… DING DING DING PUBLIC SERVICE ANNOUNCEMENT! Did you know that Aldi has now developed a dupe? Let’s face it, it was only a matter of time as they dupe everything; but flavour-wise, the biscuits are absolutely bang on. It’s just the texture that sets them apart as they are a little more dense than the Lotus. I haven’t had a chance to try the Aldi spread as it was a limited edition and sold out quickly.

These cupcakes are lovely and fluffy and actually very simple to make, because it uses vegetable oil there isn’t even any beating to do, it’s a case of throwing it in a bowl and giving it a mix. The sponge was adapted from a Cupcake Jemma Oreo recipe but I adapted it for biscoff. You could do the same thing and adapt it to any filling you like such as nutella, marshmallow or even a dark fruit compote. Why not try adding a biscuit in the bottom of your cupcake cases too?

If you want to make an oozy cupcake core then you will need approximately 1 teaspoon of biscoff spread per cupcake.

To make the sponge.

To make the buttercream.

It’s really important that both your butter and your biscoff spread are room temperature. Not only will it make your buttercream easier to fluff up –  it will also make sure they merge together really well. If the butter especially is cold it will form little buttery lumps when you try and mix it with your spread – no one wants a bite of that!

When your cakes are cooled, decorate as you like! If you want to make an oozy core – scoop out a little of the cupcake middle with an apple corer or a knife – chef’s perk is that you have full permission to eat all of these! Fill the middle with a spoon of biscoff spread, heat it slightly to make it easier to plop in.

If you don’t have piping nozzles the use the back of a spoon to spread on the buttercream and make them a little more rustic.

A little tip is to heat up the biscoff spread a tiny bit to make it easy to drizzle over your icing – make sure its not bubbling hot or it will melt your buttercream.